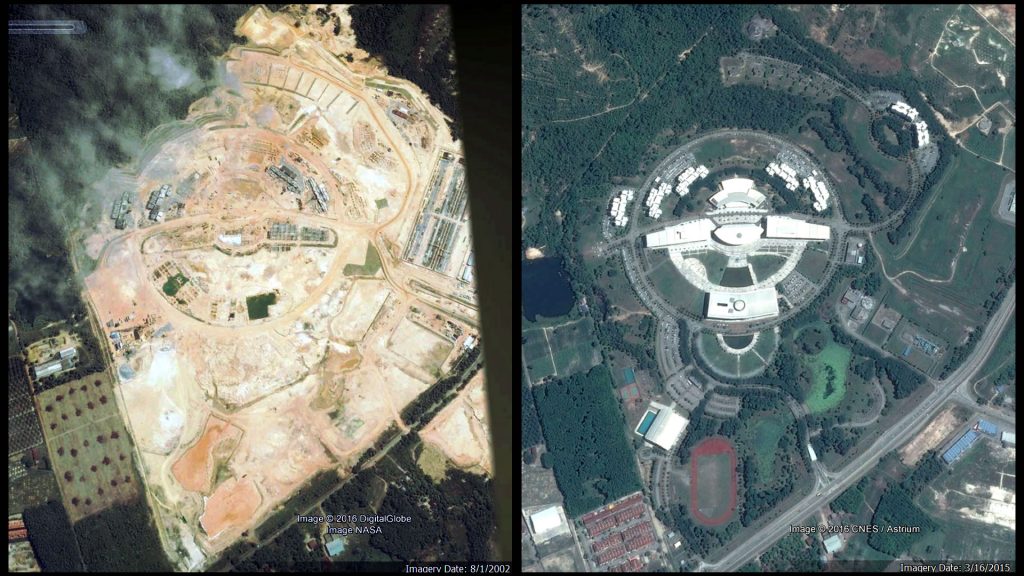 The Satellite Images from Google Earth shows a great contrast between the landscape between the footage taken on 1st August 2002 when AIMST University is in the progress of building, comparing to the latest Imagery taken on 16th March 2015. [Source: Google Earth]

Ever wonder how much impact of natural surrounding during and after a huge construction project such as building the AIMST University Semeling Campus will defer ?

By comparing the satellite images of both previous and recent imagery, it shows a significant changes to the surroundings. During the initial construction, huge landscape is Tera-formed, Areas are stripped bare, Trees are removed, hills are flattened, artificial lakes are created, even before the actual construction of buildings takes placed. In the imagery of year 2002 clearly shown barren yellow earth with very minimal foliage.

As almost 13 years passes by, the new plants that have been introduced to the landscape had start to established and colonized the area, forming a green campus compound.

The greenery of AIMST had restored, creating a great contrast between the glimmering shine of the silver roof top of the buildings and its surroundings. The most outstanding in the satellite images is the circular pathways and roads connecting the buildings. It initially features a Wau (Traditional Kite) shaped outline as seen from aerial view in the initial draw board of AIMST University campus. These features still able to be appreciated in satellite images as viewed from 13 miles up in the sky. Thirteen years passed and this is the satellite imagery of AIMST University taken on 16th March 2015 by CNES/Astrium. [Source: Google Earth]

This entry was posted in Aimst University General Information and tagged aimst university. Bookmark the permalink. . Print .
© 2002-2022, Created by Students of Aimst University, All Rights Reserved.